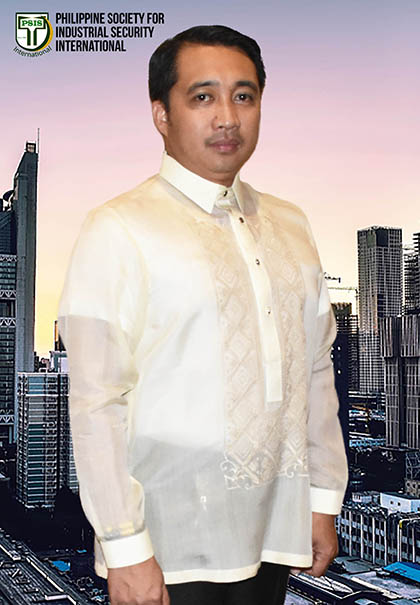 A native of Baguio City and a graduate of Bachelor of Science in Engineering in Saint Louis University and eventually a board passer as a Registered Electrical Engineer and Registered Master Electrician. And a master’s degree in Public Administration.

At present, he is the Security Manager of Midas Hotel and Casino. Formerly a Security Specialist (Security Consultant) of R3 Risk Management Consultants Inc under the Chairmanship of Police Director Robert Delfin PNP(Ret), the former Director for Intelligence of the Philippine National Police. He was employed as Operations Officer of Securitron Security Service Incorporated(SSSI) controlling all Security Mall Operations of the Agency for Starmall and concurrent Security Management Representative (Overhead) for SM Mall of Asia of Mustang Security Group of Companies.

He was also assigned as Intelligence Officer of the 1st Air Reserve Wing at Villamor Air Base, Pasay City and designated as Military Training Instructor(MTI) of the 2nd Air Reserve Center of the Air Force Reserve Command, Philippine Air Force.

A Graduate of the Probationary 2nd Lieutenant Training Course (Advance Air Science 43) of the Philippine Air Force Class 1999 top of their class and a Student Officer of the Air Command and Staff College under the Air Education and Training Command for the Basic Air Force Officers Course Class 2002-Bravo.

For his Eligibility and Qualification in the Security Profession, he earned the highly coveted Board Certification in Security Management as a Certified Protection Professional (CPP) of ASIS International, the highest recognition of a security professional in the world. A Certified Security Professional (CSP) by the Philippine 11 | Page Society for Industrial Security as one of their class topnotcher and as a Certified Security Management Specialist (CSMS) by the PNP-SOSIA and PADPAO also as their class topnotcher.

A Licensed Security Consultant by SOSIA under the Philippine National Police – Civil Security Group(CSG) and a Safety Officer as a Basic Occupational Safety and Health (BOSH) certified by DOLE.

Other positions held are as Corps Commander of the SLU PAF ROTC Unit in 1999 and Commandant of the SLU LHS PAF CMT in 2000. An SK Chairman of the Sangguniang Kabataan in their barangay and a Youth President of St. Vincent Parish Youth Society. Also, the Student Council Executive President of Saint Louis Boys High School, the NBCS Student Government President and NBCS News Organ Editor-in-Chief.

He also held various trainings and schooling such as the Comprehensive Survey, Security Plan, Disguised Technique and Profiling conducted by members of the Federal Bureau of Investigation(FBI). The Philippine National Police(PNP) -Intelligence Training Group (ITG) for Personnel Security Investigation, Photo and Video Surveillance and Casing Operations. The Basic Life Support and Rescue Operation by the Philippine Red Cross and Makati Rescue Group.

He has received awards and commendations such as the Bronze Cross Medal, Military Merit Medal (MMM), Military Commendation Medal, EDSA 2 Campaign Ribbon, Luzon Anti- Dissidence Ribbon, the AFP Kagitingan Badge and the Marksmanship Badge as Expert for Cal.45 and Sharpshooter for Cal. 5.56 M16 in his military career.